The visualization of the geophysical results are approached by referencing the existing data with better preserved sites of the region comparing similar structures and dimensions, aiming to preserve architectural local features and details of decoration. 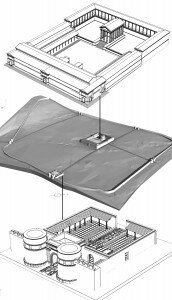 First attempt to reconstruct the forum and the Porta Sul of Ammaia (illustration by M. Klein)

Digital Elevation models, geophysic results, 3d Laser and Lidar -scans are taken into account to build the ancient terrain, where the results of the architectural 3d reconstruction will reside.

Special programs are used to achieve realistic results and breathe live into the scenes . A motioncapture system is used to drive the animation of computer generated people to ensure correct movements while keeping the production costs feasible . Sophisticated render algorithms will enable the creation of thousands of terrain features, like plants, stones and boulders as well as populating the scenes with animated characters.

The output will result in a short movie clip (approx. 15Min) which can be also used for ongoing productions for television (documentaries) and print publications, with the option to re/use the produced data for other medias like installations for augmented reality, 3d realtime applications (educati