The excavations at the thermal complex, situated immediately south of the forum begun already in 1996, with several irregularly spaced campaigns until 2003, but a new program of stratigraphical investigations started in the summer 2008 under the direction of C. Corsi and F. Vermeulen (University of Evora) with the help of the Fundação Cidade de Ammaia (archaeologists J. Carvalho and S. Borges) and students of different Portuguese and foreign universities. 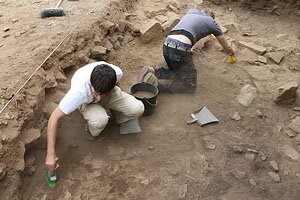 Photograph of the 2009 excavations on the thermae (photograph by F. Vermeulen)

What has been brought to light until now are parts of a vast complex, containing several rooms, some with bathing facilities, and a small part of a  natatio. Fragmentary remains of suspensurae indicate that one or more spaces were heated under their floors. Also different elements of the water distribution and evacuation system were excavated. Furthermore, a major effort was done to understand the full topography of the site. This implied a campaign of topographic and geophysical survey of the whole area of the bathhouse. This work was much hindered by the fact that part of the site was destroyed during the 1920’s when the road from Marvão to Portalegre was constructed here, cutting through what now seems to be the heart of this monumental bathhouse. However, by careful analysis and positioning of several still standing or detectable wall structures on the edge of the street and by linking them up with the results of  detailed GPR and magnetic surveys of the remaining agricultural space in this area of Ammaia and with the still preliminary results of the new digs, we are now able to obtain much more understanding of this monumental complex.

2009 excavations at the thermae

The new excavations clearly confirmed that the bathhouse was not the first building in this part of the city. It was preceded by a possible rectangular building structure with portico (?), whose function is still unclear, but which cannot at the moment be connected with a thermal use. It might be part of pre-Flavian town structures, possibly with residential function (domus?). According to the preliminary analysis of associated pottery, somewhere in later Flavian times or the early 2nd century a bathhouse was constructed here. Taking all data into consideration this was probably a rectangular structure of min. 40 m x 40 m.  Awaiting further information from new digs, it is still too early to understand the full plan of this bath complex, whose occupation (into the 3rd century?) remains also to be dated with precision.