Earth resistance survey is one of a number of different geophysical survey techniques that can be applied by archaeologists to record the remains of sub?surface archaeological structures. It is based on the ability of sub?surface materials to conduct an electrical charge passed through them. All materials will allow an electric current (i.e. the flowing of charged particles) to a greater or lesser extent. The technique is based on the creation of an electric current between probes in the earth to measure variations in resistance over a survey area. 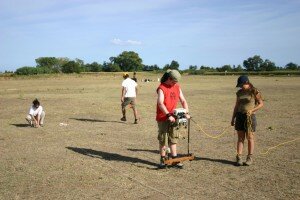 Resistance is measured in ohms (?), whereas resistivity, the resistance in a given volume of earth, is measured in ohm?metres (?/m). Resistivity survey, has since many decades been very successful in archaeology, especially for locating walls, ditches, paved areas and banks, and the application of resistance tomography allows such features to be recorded at various depths.