Past and on-going surveys in the territory of Ammaia reveal step by step the nature of the econimic hinterland of the Roman city. The rural landscape of Ammaia can be divided in two large zones: the zone to the south of the town and the zone of the town itself and north of the town. This distinction is related to the geologic and geomorphologic features of both terrains. 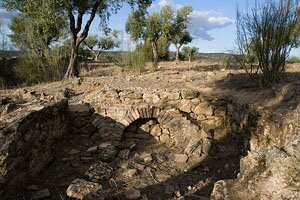 Remains of the excavated bath complex of the Roman rural villa of Herdade dos Pombais I (photograph by D. Taelman)

The first zone is characterized by the typical Alentejano rolling plains, an unfertile soil, and limited rainfall. The second zone is also composed of vast rolling plains (schist and granite), this time alternated with steep quartzite ridges locally reaching a height of more than 1000 m above sea level. This region, and especially the area immediately around Ammaia, is relatively abundant in water, has fertile soils, and is extremely rich in minerals (gold, silver, lead, hematite, rock crystal, etc.).

This geologic and geomorphologic distinction has clear consequences for the rural occupation of the territory of Ammaia. The good agricultural conditions and the mineral wealth of the second zone provoked the development of a large amount of smaller farms and rich villae complexes. The main activity of these sites were agriculture and mineral exploitation. Several of these sites have been (partly) excavated (e.g. the villa of Herdade dos Pombais I). The majority, however, are only known through survey.

The southern part of the territory has a different occupation pattern and follows the tradition of the southern part of the Alentejo region. The Roman presence is mainly typified by larger, centralized farm estates (e.g. the villa of Torre de Palma). Due to the bad farming qualities, smaller complexes were not able to survive. Agriculture, but also the breeding of horses, were very important activities.