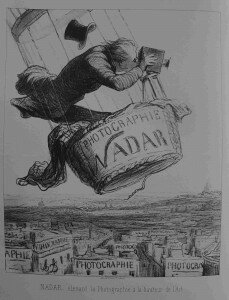 The use of aerial photography for archaeological research is almost as old as the invention of photography and systems to fly. The first images to be used for the comprehension of archaeological evidence were in fact already taken by the famous master of photography Gaspard-Félix Tournachon, better known as Nadar, and pioneering applications were already developed by Giacomo Boni on the Forum Romanum. Innumerable examples of archaeological discoveries could be mentioned for the 1910’s, 1920’s and 1930’s (unforgettable are the first discoveries of the Roman Land division systems in Northern Africa by Charles Saumagne and others).

Aerial photography and stereoscopy applications got an impressive impulse during the second World War, when many thousands of vertical aerial pictures were taken for “espionage” and mapping of war field purposes. Since then aerial photography has developed as an intrinsic part of archaeological survey. The systematic use in archaeology of vertical photographs, often not taken for archaeological purposes, has revealed itself crucial for the detection and mapping of traces and ancient landscapes. Active aerial photography, often taken from lower altitude and with an oblique camera position, became more and more widespread in Europe since the 1960’s. The development and democratization of colour photography and later of digital photography, together with the cost efficiency of the technique, stimulated its role in landscape archaeology today.