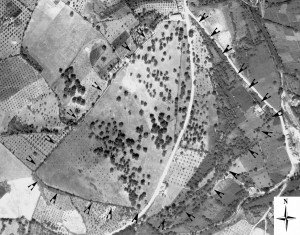 Some aerial-archaeological research has been done in recent years using the vertical aerial photographs made available by the Instituto Português de Cartografia e Cadastro (mainly flights of 1952, original scale 1/15 000) and some ASTER and  Landsat satellite imagery. Mostly the vertical black-and-white aerial photos proved very useful to reconstruct the town surface delimitation (later confirmed by field survey), the suburban Roman road network, to delineate some possible alignments of ancient land divisions, the position of the western aqueduct in the part closest to the town, the existence of a regular street layout in the urban area (as later confirmed by the geophysics survey). The research will be deepened by analyzing the patrimony of historical aerial photography (vertical for the most part) that is filed in the archive of the Universidade de Lisboa

Recently, also tests were done with a so-called Helikite (operator G. Verhoeven, Ghent University), a combination of a helium balloon and a kite connected with a remotely controlled photo camera and observation platform. They proved of value for the study and feature mapping of open areas, such as the site of the Roman granite quarry, but revealed unsatisfying in the zone of the urban site of Ammaia, where operations and visibility are hindered by trees and other vegetation cover.