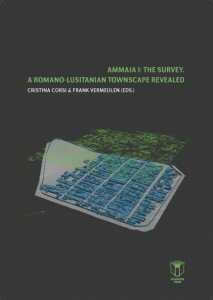 This book presents the most important results of the European funded project RADIO-PAST or “Radiography of the Past. Integrated non-destructive approaches to understand and valorise complex archaeological sites”. In order to develop non-invasive approaches to investigate, interpret, visualize and valorize complex archaeological sites, the researchers of the project have selected the site of Ammaia, a deserted Roman town in Portugal, as an “open laboratory” for intensive field research. Here innovative approaches ranging from field archaeology to geomorphology, from remote sensing to geophysical survey, from ICTs to Cultural Heritage management, have lead to an exemplary study of a lost Roman town.

This research effort is part of a wider trend all over the ancient world to study abandoned Roman towns using a wide array of modern survey methods. When combined with more established approaches, such as stratigraphic excavations and the study of legacy data, these methods can produce a much more complete vision on urbanism under Roman dominance. The impressive results of interdisciplinary fieldwork undertaken in Ammaia over the last five years add much to our understanding of the organization and character of a newly established town in the Roman West and in the Iberian peninsula in particular. The present study helps to shift the focus of Roman urbanism studies from provincial capitals and larger, more monumentalized or better preserved cities in the West, to mid-sized and smaller urban settlements: they indeed are the backbone of the urban world as the Romans developed it with the help of native populations.

I. 1 History of archaeological research

I. 2 The town of Ammaia in ancient sources

I. 3 The territory of Ammaia: topography and resources

II. 2 Building a topographical model for the Roman town of Ammaia

II. 5.a Strategies and planning

III. 2 The aqueducts and suburban area