Simultaneous with the on-going archaeological excavations of the Fundaçao Cidade de Ammaia at the Roman town site of Ammaia in Portugal, a group of researchers of the universities of Ghent (F. Vermeulen, M. De Dapper, S. Deprez) and Cassino (C. Corsi) has, during these past years, been doing a geo-archaeological and topographic survey of this ancient town and its territory. A combination of fieldwalking, geomorphological analysis and the study of aerial photographs has allowed to reconstruct almost completely the circuit of the city walls, to identify several elements of the Roman street pattern, to suggest a plausible hypothesis for the location of the major roads connecting the town to its hinterland and beyond, to locate several possible buildings in the suburban area (e.g. the theatre) and to suggest the identification of several funerary areas along the roads entering the urban area. Some of these same roads were revealed as possible main axes on which at least two orthogonal systems of land division were centred in Roman times. 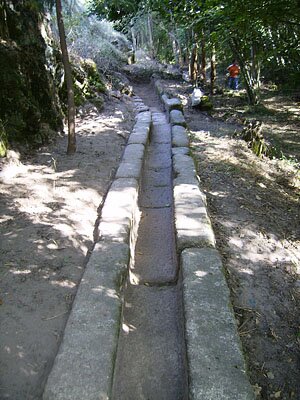 Specus in granite of the western aqueduct found during geo-archaeological fieldwork (photograph by J. Carvalho)

Of great interest is certainly the discovery in the field of the source and initial canalisation of a major Roman aqueduct, whose linear connection with the water distribution intra muros was traced with the help of air photo interpretation and fieldwork.
Other observations are connected with the erosion history of this urban site and the impact of Roman and post-Roman terraces (and their abandonment) on post-depositional processes. Post-Roman degradation of the old terrace system, on which most of the city quarters were probably build, coupled with the gradual abandonment of the inhabited area, no doubt explains many of the erosion processes that occurred in the central and western part of Ammaia. Fieldwork in the sector of the footslope immediately west of the newly proposed city area showed the existence here of many breaches in the actual terrace walling. Heavy degrading of culture terraces in the upper part of the walled town and immediately west of this sector could therefore be responsible for most of the post-Roman colluvium cover of the forum area and of other areas of town situated to the east of it.