In the earliest occupation phase of the town, the architecture of Ammaia was characterized by the use of locally available building stone (i.e. schist, and quartzite and sandstone pebbles). From the second half of the first century CE onward, a clear shift towards the adoption of granite building blocks can be remarked. This implied the start of a well-organized stone economy for the city.

Several geoarchaeological survey campaigns between 2006 and 2009 allowed to identify and study the main granite quarry of Roman Ammaia (doctoral research D. Taelman, Ghent University). The Pitaranha quarry (named after the village located nearby) is located at ca. 8,5 km from Ammaia and is the largest know ancient quarry in the northern Alentejo region. Traces of ancient quarrying in the Pitaranha quarry are concentrated on a semicircular hillside and consist mainly of pathways, wedge holes, and semi-extracted blocks (both regular blocks and column shafts). At the foot of the hill, debris heaps and an accumulation of semi-worked blocks point to a large processing zone where the blocks were prepared for transport. On the plain at the foot of the hill, remnants of a workshop for the production and the repair of the iron tools needed for the quarrying, can be detected. 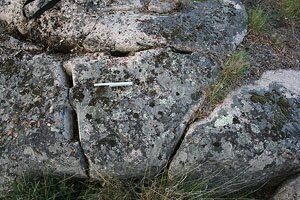 Wedge holes in an semi-extracted block in the granite quarry of Pitaranha (photograph by D. Taelman)

Future work here includes the use of aerial photogrammetric methods, topographic survey, and LiDAR for the mapping of the site. This will allow a complete study and understanding of the complex organization of the quarrying activities of this Roman granite quarry.