Report on the Second Specialization Forum

The Second Specialization Forum on “non-destructive approaches to complex archaeological sites”, which took place in Ammaia/Portugal from July 3–9, 2011, was a stimulating international event that brought together leading specialists in the fields of geoarchaeology and geophysics, and more than 20 participants from 12 different countries. The themes of the lectures covered a great breadth of topics on geophysical and geomorphological survey: the use of geoarchaeological methods for the investigation of ancient tectonic settings, sea level changes, and the dating of archaeological finds; archaeoseismology and the detection of seismic effects on ancient sites;  the principles and archaeological applications of geophysical methods, such as magnetometry, electric resistivity, Ground Penetrating Radar (GPR), and metal detector survey.

The lecturers demonstrated the benefits of using non-destructive approaches to archaeological sites by presenting a great number of illuminating case studies, mainly from Portugal, Italy, UK, Spain, Greece, and Turkey. In the afternoon participants had the chance to attend small-group seminars where a number of issues associated with the use of geoarchaeological and geophysical methods were further discussed and elaborated. One of the most interesting and informative aspects of the Forum were the field labs, during which the attendees had the chance to observe on site demonstrations of high-tech equipment for geophysical survey.

The Summer School turned out to be pleasurable as much as educational, due to the planned social events and visits – among them a guided tour of the archaeological site and museum at Ammaia and a trip to the historic village of Marvão – which gave participants more opportunities for lively discussions and social interaction.

Prof. Frank Vermeulen giving a lecture at the 2011 Summer School. 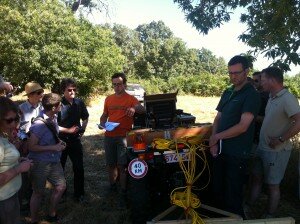 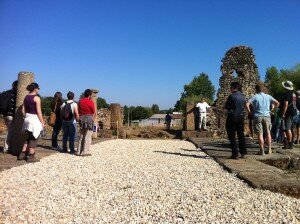 Fieldwork session at Porta Sul of the Ammaia archaeological site. 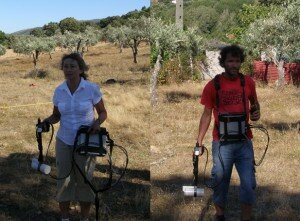