Report on the 3rd Specialization Forum 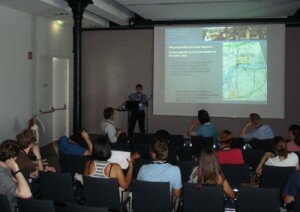 Lecture room at the Kulturfabrik Hainburg where the Forum was hosted.

The Third Specialization  Forum, entitled ”3D visualization for the study and management of complex archaeological sites”,  took place in Carnuntum (Hainburg – Austria) between July 2–7, 2012. It was the last of three high formation summer schools in the framework of the FP7 Marie Curie – People IAPP project “Radiography of the Past”.

The theoretical topics and case studies, hands on applications, practical IT based sessions and seminars, carried out with the aim to interpret, visualize, present and reconstruct archaeological data and ancient landscapes data, were representative, not only for the Project’s working programme, but also with regard to the ongoing discussions in this field of research to which the invited speakers provided vivid testimony. 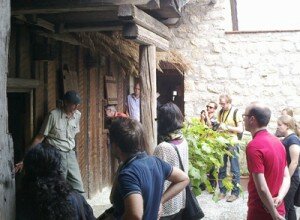 Visit to the Archaeological Park of Carnuntum, an ancient Roman town site.

As in the last two years, the course was again frequented by a great number of master degree holders and doctoral students from 16 different countries, ranging from Northern Europe to the Mediterranean, and the Near East to the British Islands.

Here is how two of the participants describe their experience:

“Participating in the Radio-Past Project’s 3rd Specialisation Forum was a first time encounter for me with the project. In many ways it was also a first time encounter with the part of the archaeological community employing a whole array of different digital approaches to archaeology. Having only dabbled in such matters myself it was wonderful being introduced to the variety of methods being employed today. Probably the greatest pleasure was the realisation that there are people in the community that try to deal with the boundaries, implications and practical applicability of these new tools. An important issue raised several times were the storage and accessibility of the data procured. Interestingly it seemed to me that we, the participants, were less hopeful of the future than the speakers about the accessibility of data. In terms of storage I would venture that yes storage is an all important issue, but interpretations will keep the data alive, even if the interpretation later proves wrong – simply stockpiling data is not enough. Another interesting aspect of this Radio-Past forum was the focus on cross-national initiatives. Many projects claim to be international, but few really are, at least to the extent of participants at this forum.” 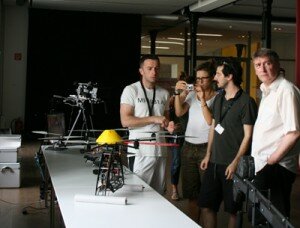 Hands-on approach to an octocopter for aerial photography.

“Radio-Past’s 3rd Specialization Forum at Hainburg became a great experience for me in terms of theoretical thinking as well as practical approaches in the field of virtual archaeology. We had the opportunity to learn from industry professionals by experiencing concrete examples and to critically discuss ideas about 3D visualization of archaeological processes. In this way the workshop helped me a lot to shape the research design of my thesis…  ”

After the organization of the three courses, the next step in the Project´s agenda is now the closing event on good practices in the area of non-destructive approaches to complex archaeological sites, which will take place in Ghent in January 2013. 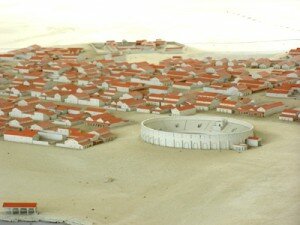 1:300 scale model of the ancient town of Carnuntum.

During seminar work at the Kulturfabrik. 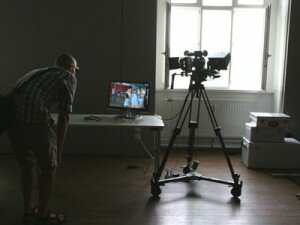