Georadar or Ground-Penetrating Radar (GPR) survey is based on the use of an electromagnetic radar wave propagated through the soil to search for changes in soil composition and the presence of structures, measuring the time in nanoseconds (ns) taken for the radar wave to be sent and the reflected wave to return. This technique has been applied successfully on a range of archaeological sites, in particular over substantial urban archaeological remains such as classical sites. As the method is generally slower than magnetic survey or earth resistance survey, it is more appropriate to apply this method to target particular areas of interest at an archaeological site where such other methods have already been applied, or where there is a potential for deeper archaeological deposits. Instruments used in archaeological survey generally have a propagation of radar waves down to a depth of approximately 3m to 4 m depending on the nature of the subsurface materials. 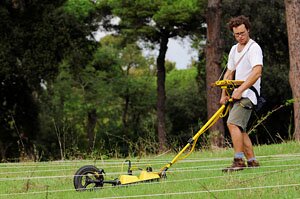