On December 4, 2010, the launch of the book «Changing Landscapes – The impact of Roman towns in the Western Mediterranean» took place at the National Archaeology Museum in Lisbon. The Emeritus Professors José d’Encarnação and Vasco Mantas from the University of Coimbra were in charge of the presentation, which afterwards continued to feed the exchange of ideas among the editors, Professors Cristina Corsi and Frank Vermeulen, some of the participating authors and the interested  audience of the event. 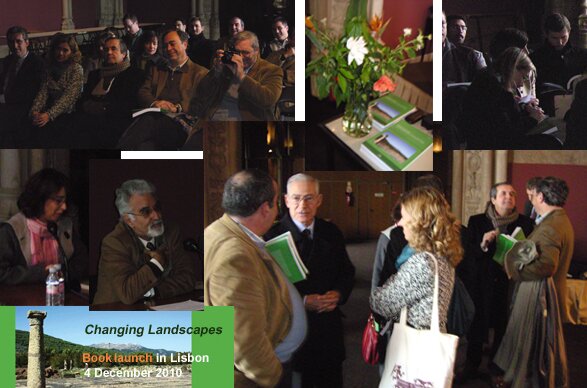 The book itself is composed of 24 contributions, which reflect the proceedings of an International Colloquium that was organized by the Centro Interdisciplinar de História, Culturas e Sociedades (CIDEHUS)–University of Évora, in association with the Fundação Cidade de Ammaia, and held in May 2008 at Castelo de Vide/Marvão (Portugal). Its subject matter is briefly summarised on the back cover of the fully illustrated edition by the Italian publishing house Ante Quem:

«Roman archaeology has for centuries been looking mostly at the urban centres and especially at the great monuments that rose within them. Today, a new generation of archaeologists has convincingly shown which was the crucial impact of Roman urbanism on the landscapes of the Western Empire. Using an array of new techniques, such as remote sensing and GIS-based spatial analysis, integrated with more traditional approaches, new ideas about the relationship of interdependency between town and territory have been developed.

During a 3-day congress held near the Roman-Lusitanian town site and museum of Ammaia, in central Portugal, internationally renowned researchers have presented regional syntheses and excellent case-studies of this impact of Roman towns on the landscape of, in particular, the south-western provinces. This book is a well-illustrated reflection of this scientific endeavour, which will set out the pathways of research into Roman urbanism and landscape evolution during the coming decades.»